skip to main | skip to sidebar

Now my Uni course is over for the summer, I can return to my first love - welding! 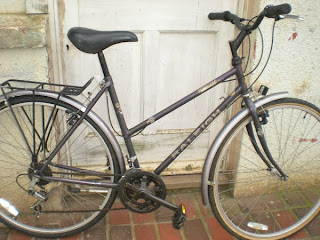 Some of the boys who are studying engineering (yes, we fashion girls sometimes mix!) are currently messing around building new 'extreme' bicycles for themselves - recumbents, and double-deckers and so on. They often ask me to modify the frames for them, but you have to be very careful. Depending on the make and style of bike, the frame tubes may be joined with lugs that are Sif-brazed. They are very strong and very crack resistant but if you later weld lugs near the joints, you can soft-melt the brazing material, which then oxidises and may later fail.
As well as a fashion designer and welder, now I am becoming a bicycle designer!
Posted by Alice Scradcza at 08:14

Alice Scradcza
I came from Lithuania when I was very little. I learned to weld in College, and then worked for a big car manufacturer with lots of robot welders. After that, I did some general engineering, but then started to study fashion and making clothes at college. Really I would like to teach welding, but I am a woman so no-one wants me. My idol is Julie Dean - Nicaragua's most famous welder.